Pemphigoid is a rare autoimmune disorder that can develop at any age, including in kids, but that most often affects the elderly. Pemphigoid is caused by a malfunction of the immune system and results in skin rashes and blistering on the legs, arms, and abdomen.

It can also occur during pregnancy in some women. There is no cure for pemphigoid, but there are various treatment options.

In cases of bullous pemphigoid (the most common of the three types), the skin blistering happens most commonly on the arms and legs where movement occurs. This includes the areas around the joints and on the lower abdomen.

Cicatricial pemphigoid refers to blisters that form on the mucous membranes. This includes the mouth, eyes, nose, throat, and genitals. The rash and blistering may begin in one of these areas and spread to the others if left untreated.

When blistering occurs during or shortly after pregnancy, it is called pemphigoid gestationis. It is also called herpes gestationis, although it is not related to the herpes virus. The blistering typically develops during the second or third trimester, but may occur at any time during pregnancy or up to six weeks after delivery. Blisters tend to form on the arms, legs, and abdomen.

In many cases, there is no specific trigger for pemphigoid. In some instances, however, it may be caused by certain medications, radiation therapy, or ultraviolet light therapy. People with other autoimmune disorders are found to be at a higher risk for developing pemphigoid. It is more common in the elderly than in any other age group. 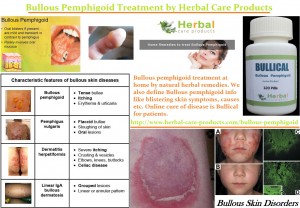 The most common symptom of bullous pemphigoid is blistering that occurs on the arms, legs, abdomen, and mucous membranes. Hives and itching are also common. The symptom for bullous pemphigoid blisters have certain characteristics, regardless of where on the body they form:

Your dermatologist will be able to make a fairly firm diagnosis simply by examining your blisters. Further testing will be needed to prescribe the right treatment.

Your doctor may want to perform a biopsy, which involves removing small samples of skin from the affected areas (skin biopsy). Lab technicians will test these samples for the immune system antibodies characteristic of pemphigoid. These antibodies can also be detected in your blood, so you may need to have a small sample of blood drawn.

Pemphigoid cannot be cured, but treatments are usually very successful at relieving symptoms. Corticosteroids, either in pill or topical form, will likely be the first treatment your doctor prescribes. These medications reduce inflammation and can help to treatment of bullous pemphigoid the blisters and relieve itching. However, they can also cause serious side effects, especially from long-term use, so your doctor will take you off of the corticosteroids after the blistering clears up.

Another bullous pemphigoid treatment option is to take herbal treatment for bullous pemphigoid that suppresses your immune system, often in conjunction with the corticosteroids. Immunosuppressants help, but they put you at risk for other infections. Certain antibiotics, such as tetracycline, may also be prescribed to reduce inflammation and infection.

With comprehensive treatment, the outlook for pemphigoid is good. Most people respond well to medication. The disease will often go away after a few years of treatment. Pemphigoid may return at any time, even with proper treatment.