5 Foods to Avoid If You Have Bullous Pemphigoid

5 Foods to Avoid If You Have Bullous Pemphigoid

Bullous Pemphigoid is an autoimmune disorder that causes blisters and sores on the skin. While there is no known cure, there are certain foods to avoid that can help reduce the severity of the symptoms. In this blog post, we’ll take a look at five foods to avoid if you have Bullous Pemphigoid. By avoiding these foods, you can help keep your skin healthy and reduce the severity of your symptoms.

Nightshade vegetables, such as tomatoes, peppers, eggplants, and potatoes, are believed to have a link to bullous pemphigoid. While there’s not much scientific evidence to prove that these vegetables cause the condition, it’s recommended to avoid them if you suffer from bullous pemphigoid.
Nightshade vegetables contain alkaloids, which are toxic substances that can affect the immune system. In some cases, they may trigger an autoimmune reaction that leads to the formation of blisters on the skin. Additionally, tomatoes, peppers, and eggplants are also acidic foods that can cause inflammation.
It’s important to talk to your doctor before eliminating nightshades from your diet. A doctor or nutritionist can provide guidance on which foods to include and avoid in order to reduce inflammation and prevent flare-ups.
If you’re already avoiding nightshades but want to add more variety to your meals, consider incorporating other vegetables into your diet such as broccoli, cauliflower, Brussels sprouts, kale, and spinach. These vegetables contain antioxidants and other vitamins and minerals that can help improve your overall health. 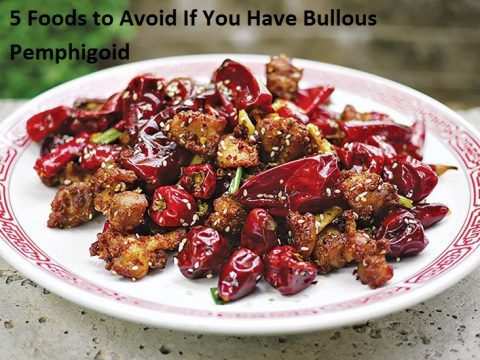 If you have bullous pemphigoid, you should be aware that certain foods can trigger an outbreak of this painful skin condition. Spicy foods are one of the main culprits, and should be avoided if possible.
When it comes to spicy foods, there’s no one-size-fits-all list of what to avoid. Some people may be able to handle mild spices, while others need to stay away from all forms of spicy food. Commonly reported triggers include cayenne pepper, hot chili peppers, and black pepper.
In general, you should avoid any food that contains a lot of heat or spice, such as curries, salsas, and other dishes with strong chili peppers or hot sauces. You should also be mindful of processed foods like chips and crackers that contain spicy additives.

Eating spicy food can cause your bullous pemphigoid to flare up in a variety of ways. Your skin may become red and inflamed, with large, itchy blisters appearing shortly after eating the spicy food. It’s important to remember that everyone is different and your reaction may vary depending on the severity of your condition.
If you do choose to eat spicy foods, it’s best to start with a very small portion and monitor your body’s reaction closely. This will help you determine whether or not your condition can tolerate a certain level of spice. If you experience any flare-ups, make sure to stop eating the spicy food immediately and speak with your doctor about treatment options.

If you suffer from Bullous Pemphigoid, it is important to pay attention to what you are eating and make sure to avoid certain foods. One of the foods to avoid with Bullous Pemphigoid is tomatoes. Tomatoes contain a chemical called solanine which can cause an allergic reaction in some people with Bullous Pemphigoid. Eating large amounts of tomatoes can also trigger an autoimmune response, which can cause a flare-up of the condition.
To reduce the risk of triggering an allergic reaction, try to eat only small amounts of tomatoes or cook them before consuming. If you already suffer from Bullous Pemphigoid and start to experience any symptoms after eating tomatoes, be sure to talk to your doctor.

Dairy products should be avoided when living with bullous pemphigoid. Dairy can contain proteins that can aggravate the condition, and it can also worsen inflammation.
Milk and other dairy products such as cheese, yogurt, and ice cream should all be avoided. In addition, lactose intolerance may also be a factor in some cases. Dairy-free alternatives such as almond milk or oat milk can be a great way to still enjoy your favorite drinks or desserts without having to worry about triggering an episode of bullous pemphigoid.
It is important to be aware of any potential triggers that could set off a flare-up of bullous pemphigoid. Pay attention to how you feel after eating or drinking dairy products and take note of any changes that may occur. Avoiding dairy can help to reduce the severity of symptoms associated with this skin condition.